This story begins on April 19th 1967, the date I was taken by bus from Melbourne to the Australian Army camp at Puckapunyal. I was conscripted by the Australian Government to serve for two years. I was 20 years old, buzzing with the promise of adventure.

10 weeks of basic training was followed by strict Army Artillery training in North Head, Sydney. I made a new friend there, Stewart, that has endured life long after we were billeted together in a 4 bed barracks room. We went our separate ways for weekend leave only.

As Christmas neared I was offered a ‘Driver Training Course’ at Randwick that included basic mechanics and army transport. When it was over I received a pay bump and had acquired the skills to service my own car.

We knew we were headed for Vietnam but were kept in the dark in typical Army style. Beforehand we were dispatched to the Conugra Jungle Training Camp in North Queensland. It was the hardest part of our training and I haven’t been as fit since.

In no time we were leaving for Vietnam, with about 30 personnel, it was 5th February 1968. We flew Qantas to Perth to pick up SAS soldiers. We took a detour via Singapore and then Malaysia on a Hercules C130. Butterworth Air Base in Malaysia certainly made the soldier experience very real and imminent. The RAAF guys gave us news of the Viet Cong and North Vietnamese troops that raised our anxiety levels and disappointingly, came with no support.

The Australian Task Force base was in the jungle in Nui Dat and despite my efforts to recall detail, this part seems hazy, I didn’t keep a diary. No accommodation was arranged so we slept above ground while the base was being attacked, don’t try this at home. Soon after, Stewart and I were bundled in a tent with 2 other guys, our living quarters, our home for the duration. The tent floor was made from ammo boxes, it was surprisingly comfortable. We all got along pretty well, which was lucky and necessary. Stewart and I were partnered with new soldiers now and again, which created some politics and tent sharing complications, we would toss a coin to appoint a person to confront the problem, usually me.

My artillery training was futile as I was assigned a different task. That was disappointing as the group from Holdsworthy were tight but I learned that the Army is unpredictable in that way.

The job itself was mostly logistical, moving personnel or material from one place to another. We had to be alert for these trips because the enemy were looking for targets, I still feel lucky to have not been caught in anything major throughout my tour of duty. Every now and again I would volunteer to help with new operations that took some of the monotony of day to day activities away. It was a perfect way to pass the time more quickly and assist crews with a heavier physical and emotional load.

For 2 months I travelled the countryside in helicopters delivering water, rations, mail and ammunition, it was a great opportunity that gave me a greater sense of purpose and satisfaction.

The Australians had good rapport with the locals in Phuc Thie Provence, the army engineers were building schools, repairing buildings and bridges and were a help to the community, we were not seen as a threat.

In that time you would get R(est) and R(elaxation) leave for 5 days at a stretch and you could choose out of 6 countries where to go, including Australia. I went to Hong Kong on my jaunt with a local mate from Melbourne. During this break, my unit lost 2 men in Operation Coral on 17 May 1968. Had I not been on leave I would likely not be here to tell the tale.

Nearing the end of the tour, I felt apprehensive. The limit for a tour was 12 months at the time. The Army would give no indication as to who or when anyone was leaving Vietnam. Turns out I returned home the same day I left, 5th February 1968, a whole year later.

Upon reflection, it was difficult to comprehend what the Australians were doing in Vietnam. Our contribution in comparison to the Americans was miniscule. Australia had a 4000 troop army on rotation at any one time. The Americans had 560,000 at the peak.

Stewart and I planned a return to Vietnam 40 years later in 2009. Saigon was unchanged, however, Nui Dat was a pile of dirt, a broken village. We found a rock that one of our fellows put in place and painted in artillery colours, that’s how we found our unit position. A surreal moment in our history together.

By Doug Power (in isolation) 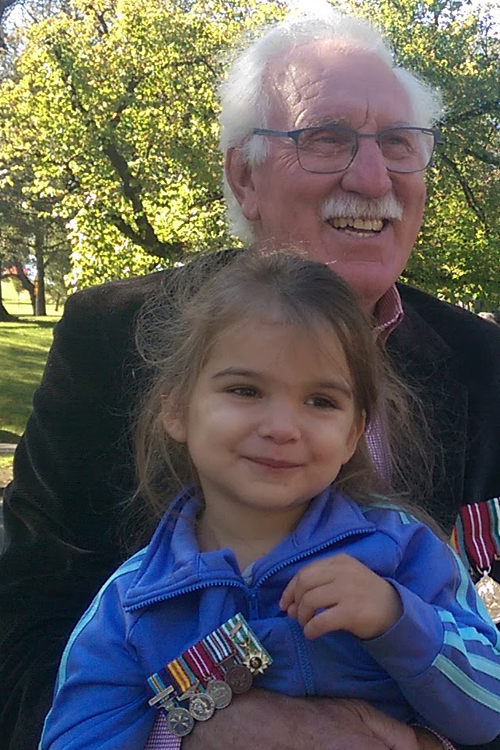 We believe in the power of stories to illuminate and educate. Through sharing our experiences of getting older and caring for those around us, we can help each other navigate the challenges we will all face at some stage in our lives.

If you would like to share your story, email us. We have a team of talented writers who would love to talk to you and help bring your story to life.

Looking back from this moment- Sarah's story

Let's get physical with Moira