It seems they've always been around, forever celebrating the remnants of a nostalgically simple view of our culture. The first known beauty pageant, held as part of a medieval joust re-enactment in 1839, crowned a young women as the 'Queen of Beauty' - even in the 19th century, it was a throwback to days of yore. Nevertheless the pageant persists, and seems sure to continue, even if in ways we may not yet be able to imagine. Here she comes: a recap of the beauty pageant. 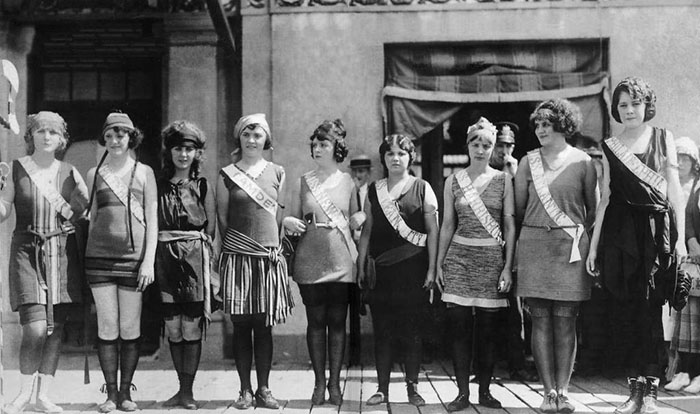 The modern beauty pageant was developed on the freewheeling boardwalk of Atlantic City during its Prohibition-era heyday. The first Miss America contest, in 1921, was the first time girls (the age range was, and still is, from 17 to 25) competed side-by-side dressed only in bathing costumes - although these neck-to-knee modesty-busters are not what we'd recognise as a swimsuit today. Winner, 16-year-old Margaret Gorman, took home a statue of a golden mermaid. 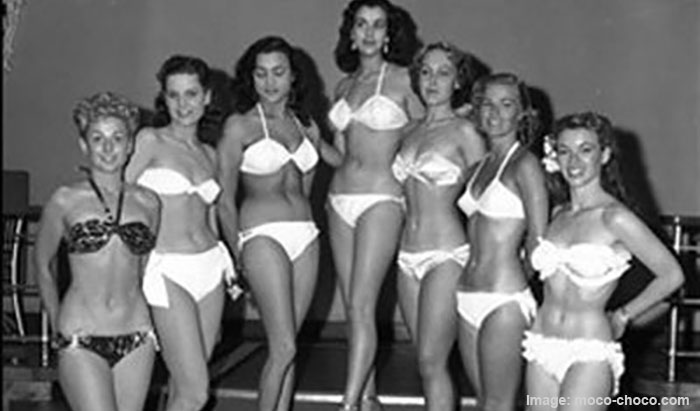 Organised leering at half-dressed young women went international in 1951, when the first international beauty pageant was established in the UK. Miss World started as the Festival Bikini Contest, in honour of the recently introduced skimpy swimsuit. However, the contest proved a bit ahead of its time - outrage at the amount of flesh on display led to the replacement of the bikini with more modest swimwear the following year. 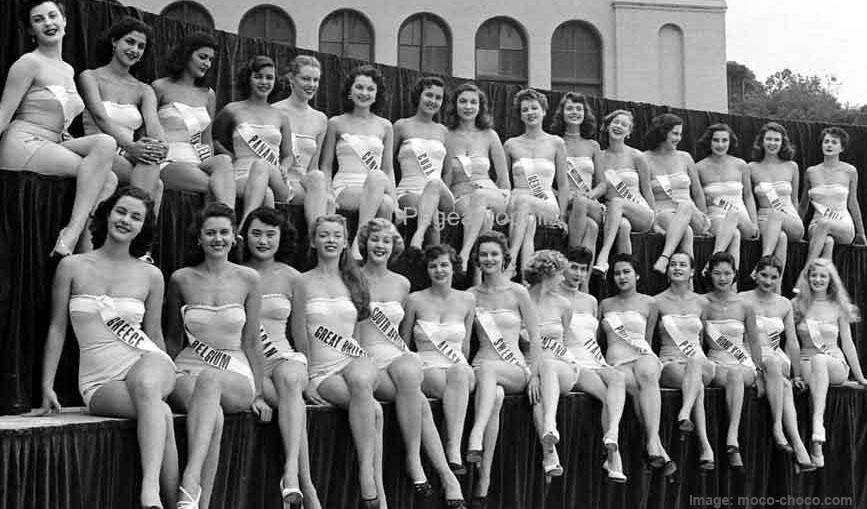 After 33 years as a legendary live attraction in Atlantic City, television took Miss America from a local publicity stunt to a national US, and then worldwide, ogle-fest. The first live broadcast in 1954 was watched by over 27 million people. The 'bathing beauty' contests of the 1950s, such as 1954's Miss Universe, imposed the same, simple bathing suit on the contestants, a level playing field on which only their personal 'assets' were judged. 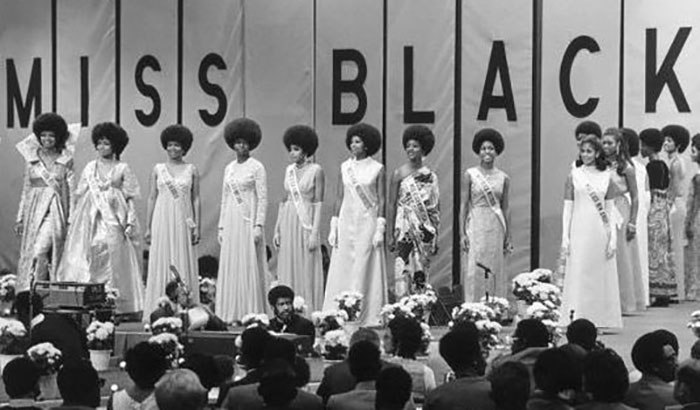 The social upheavals of 1960s America cast the beauty pageant in a new light. Miss America required all women be 'of good health and of the white race' until 1940. Rules were changed to allow women of colour to compete; nevertheless, by the late 1960s there had still never been a black contestant. Miss Black America, held in Atlantic City on the same day as the Miss 'white' America contest in 1968, aimed to challenge negative stereotypes as well as give black girls the chance to be just as objectified as their white sisters. 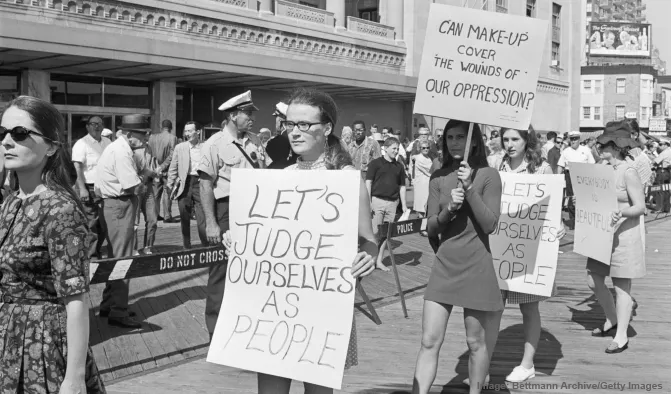 That same year, the sisterhood rose up against the beauty pageant patriarchy. They marched outside Boardwalk Hall in Atlantic City, from where the event was being broadcast, holding placards that read 'If you want meat, go to the butcher', 'Welcome to the Miss America cattle auction' and 'Women: feeling older watching your man watch Miss America?' This was the event that launched the infamous burning of bras (no bras were actually burned, merely thrown in to a 'Freedom Trash Can' while being denounced as 'instruments of women-torture'). It was a media bombshell that captured the attention of the nation and brought the young Women's Liberation movement into the spotlight. 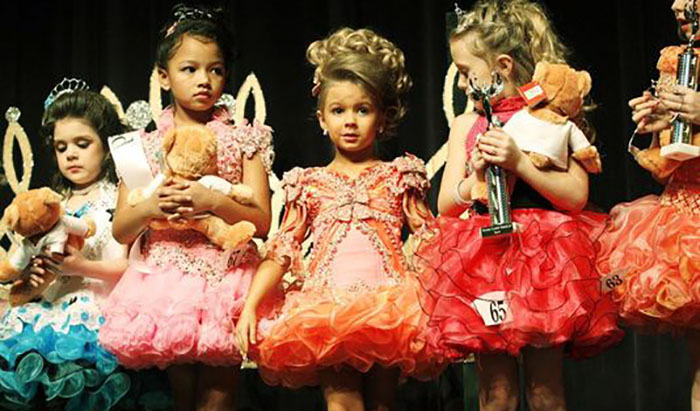 Everyone gets a go

Baby and toddler parades have a separate, parallel history to beauty pageants, having been around since the late 1880s. But, especially in the southern states of the USA, there was a collision between the glamorous and decidedly adult world of beauty pageants and the historically health- and education- focused 'better baby contests'. This has resulted in the cultural trainwreck that is the high-glitz child beauty pageant, where contestants are required to perform routines including 'sassy walk' and 'pretty feet'. A highly lucrative business (estimated to be worth about $20 million annually in the US), it's often criticised for sexualising very young girls, promoting eating disorders and encouraging extreme stage-motherhood. 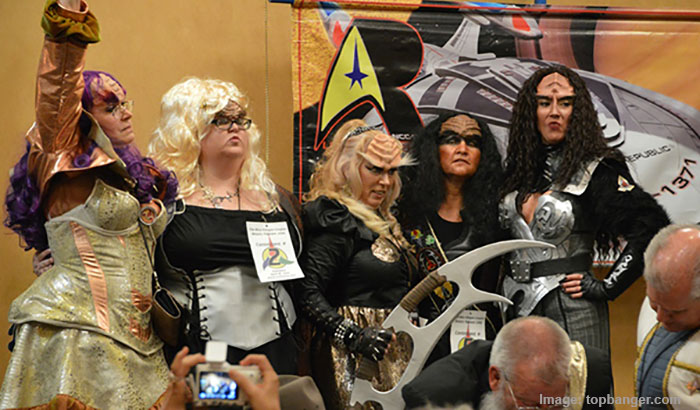 As we enter a post-pageant world - Miss America recently announced that it would no longer include a swimsuit competition, instead focussing on the competitors' 'talent, passion, and ambition' - the beauty contest world has fragmented in ways both alarming and delightful. In 2004, China inaugurated its Miss Plastic Surgery competition (age range 17 to 62), the Miss Belarus Detective contest in 2010 aimed to find the country's hottest policewoman, and contestants for Miss Jumbo Thai must weigh at least 80 kilograms.
But our hands-down favourite is the 20-year strong Miss Klingon Empire pageant, where contestants are asked to walk the runway in their Klingon persona and demonstrate a talent or skill (encouraged, but not required, to be Klingon-themed), as long as it "does not endanger herself, other contestants, the master of ceremonies, the judges or the audience. (In other words, no flaming bat'leth twirling, etc.)". To paraphrase a protest placard from 1968: "All women" - even Klingon ones - "are beautiful".