Hold the front page! Aussies like beer. Not everyone, of course, but enough of us for “Aussie beer culture” to be a thing. Whether it’s folklore, lawmakers, convicts or measurements, few aspects of our social culture have been untouched by beer.

James Squire, a pioneering Australian brewer, started making beer while still a convict in Sydney town. Having been transported on the First Fleet in 1788, Squire was caught stealing ‘medicines’ a year later. He claimed that they were herbs for his pregnant girlfriend, but later reportedly admitted they were to aid in the brewing process. His penalty (probably reduced because his clandestine brewing was actually regarded as a service to the community) was to receive 300 lashes, “one hundred and fifty now, and the remainder when able to bear it.”
James Squire’s One Fifty Lashes is now the brewery’s biggest selling beer. And it doesn’t hurt a bit.

The (real) pub with no beer

Readers of a certain vintage will know Aussie country music trailblazer Slim Dusty’s 1957 classic A Pub With No Beer. The lyrics were written by a very thirsty bloke, Dan Shehan, who, in 1943, rode over 30km to the Day Dawn Hotel in Ingham in far north Queensland for a cheeky frosty beverage.
He got there to be told that American troops had drank the bar dry the previous night, and wrote his beerless poem. From that came the first Australian gold record, the first Aussie song to ever chart in England (#3), and a top five spot in the industry-voted best Aussie songs of all time in 2008.

Bob Hawke was Prime Minister from 1983 to 1991 – Australia’s third-longest stint in the top job. Among his government’s achievements were creating Medicare and Landcare, legislating superannuation, floating the Aussie dollar, and even declaring ‘Advance Australia Fair’ as the official national anthem.
But it was beer (as he himself once admitted) that really endeared him to the Australian people. While studying at Oxford as a Rhodes Scholar, Mr Hawke broke the Guinness world record for speed beer drinking, knocking back 2.5 pints in 11 seconds. That’s almost 1.5 litres. Two longnecks. 11 seconds. Don’t try this at home.
In 2017, Hawke himself showed up to launch a new beer – Hawke’s Lager – on the condition that a share of profits went to rural environmental program Landcare. Awwww. 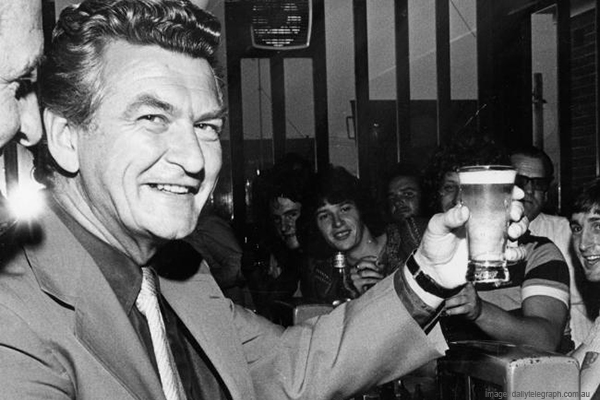 A glass is a pint is a pony

Much like rail gauges and words for swimwear, beer glass sizes were historically an easy way to work out where your new drinking buddy came from. A Territorian might order a ‘seven’ while an Adelaide resident asks for a ‘butcher’. ‘Schooners’ are almost everywhere (although you might get a sideways look in Melbourne), and – when in Hobart – why ask for a boring old pint when you could be ordering a ‘fifteen’? Other glass sizes found across our amber-drenched nation include the foursie, pony, handle, Shetland, bobby, pot and midi.
Figuring it all out is thirsty work, but it’s worth it. Cheers!