We all know about Beatlemania and World Cup mania. You have perhaps even experienced a bit of both in your life thus far. But have you ever been gripped by Egyptomania? Though it reached its peak in 1798, Egyptomania describes the fascination people have with knowing everything there is to know about those gold-loving ancients. But did you know that the fact we know so much about them now has everything to do with the finding of the Rosetta Stone?

The Rosetta Stone was discovered in the town of Rosetta, Egypt, in 1799 by the invading Napoleonic army. Napoleon, who travelled with a coterie of scholars ready to appraise any loot he could lift, had ordered his troops to seize anything they considered of value. As it happened, a soldier made the discovery of the black granite slab at a fort. The huge slab was the archeological find of the century, and literally the key to unlocking the mystery of ancient Egyptian hieroglyphs.

So, why was the Rosetta Stone so special? Well, let’s keep that question warm for a minute while we try to understand where Egyptologists were at with unlocking the hieroglyphs before they found it. 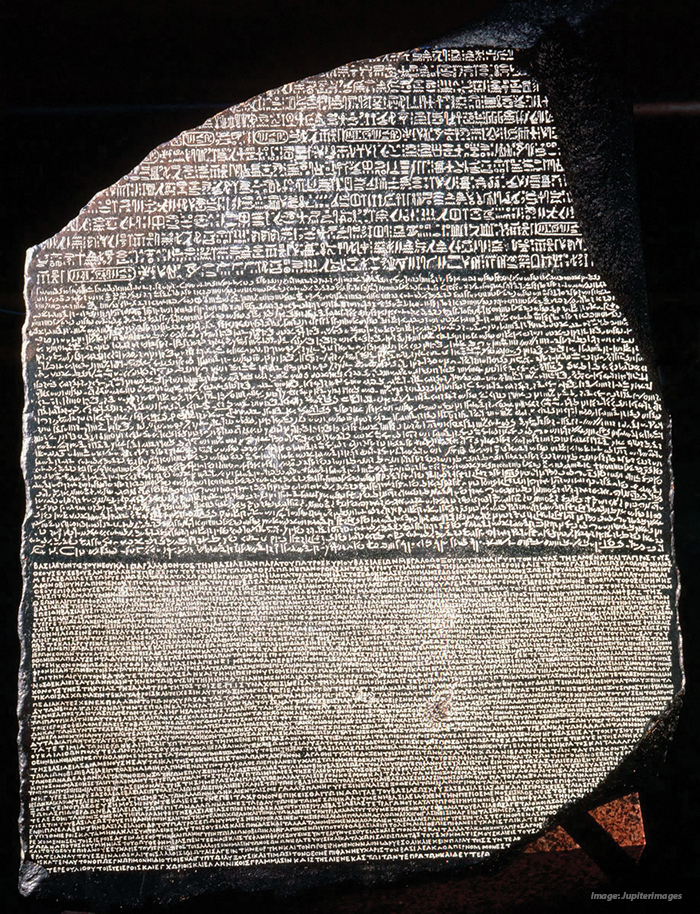 Basically, Egyptologists had managed to dig up a LOT of artefacts and find out some interesting things about the ancient Egyptians just by poking around their pyramids. They knew that they had some very intriguing burial practices (why has mummification gone out of fashion?) and that they were pretty keen on gold. But the reams of hieroglyphs that decorated tombs and artefacts remained indecipherable. The Ancient Egyptian language had been dead for ages and there was no modern language or script with which it shared ties. The civilisation was entirely cut off from modern understanding.

All that remained was the imprecise art of guessing. And while some scholars insisted the tiny images etched into the walls of Egyptian tombs and tablets were phonetic symbols that represented sounds, others were convinced that the symbols represented semantic concepts, meaning they contained ideas about philosophy and spirituality that were beyond interpretation when viewed from such a distance of time and understanding.

It took the finding of the Rosetta Stone to provide the answers. Why? Because this incredible piece of stone was etched with THREE versions of an ancient decree. One version of which was hieroglyphs. The other two scripts were Coptic and Ancient Greek, two languages that were well understood by modern scholars. It was enough to allow Egyptologists to begin the process of translating hieroglyphs into modern language.

And while the Rosetta Stone itself is a bit of a dull read (It’s all about how the new ruler King Ptolemy V is the divine king), it was crucial to establishing that hieroglyphs were phonetic. And though it took 20 years for them to be truly ‘cracked’, by Frenchman Jean-Francoise Champollion, it provided just what was needed for Egyptologists to go forth and truly understand the culture which had fascinated and frustrated for so long.