Things aren’t always as they seem, nor do they always turn out as we expected. This applies equally to individuals and nations, inventions and merchandise. Here are some memorable examples of times when things didn’t quite turn out as they were described.

Smoking is good for your health

The first medical reports linking smoking to lung cancer appeared in the 1920s, and tobacco companies grew increasingly desperate to halt falling sales.
And so, between the 1930s and ’50s, advertisers called on the assurances of one of society’s most trusted professionals, the good doctor, to restore confidence in the restorative qualities of the cigarette.
Even the hard man’s smokes, Camels, were spruiked with the unusual byline: More doctors smoke Camels than any other cigarette.
Along with sore-throat prevention, cigarette advertising targeted dieters (‘when tempted to overindulge, reach for a Lucky instead’), actors and singers (‘I protect my voice with Luckies’) and those with dyspepsia (‘for digestion’s sake, smoke Camels!’).
We all know where that ended up… 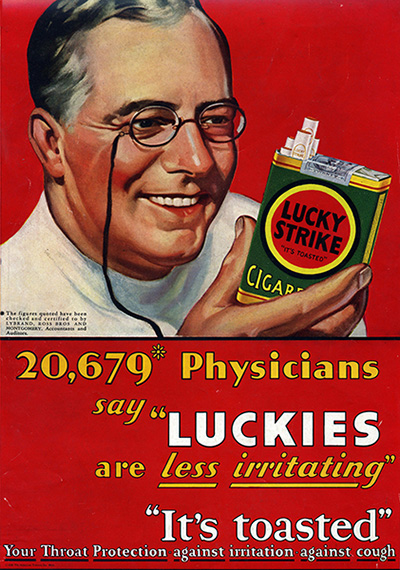 Go and take a Bex

During the heyday of quack remedies and unsubstantiated medical claims– the 19th century – opium derivatives found their way into all kinds of products, including Mrs Winslow’s Soothing Syrup for teething children (a gram of morphine in each fluid ounce!).
Allen’s Cocaine Tablets ‘for hay fever, catarrh and throat troubles’ also promised to cure nervousness and sleeplessness – no wonder!
Pope Leo XIII’s favourite wine, Vin Mariani, included a curious ingredient: Peruvian coca leaves. With 7mg of cocaine per fluid ounce, the catchphrase ‘for body and brain’ was for good reason!
Closer to home, Australian housewives were routinely advised to ‘have a cup of tea, a Bex and a good lie down’ when they were feeling poorly. That is until the 1970s, when the use of analgesics such as Bex became more regulated due to their highly addictive ingredients phenacetin and caffeine. A lie down indeed.

Before it was linked to the fatal illness of mesothelioma, asbestos powered Australia’s postwar building industry. Asbestos had it all: it was cheap, easy to use and transport, fireproof and heatproof. The DIY homebuilder could use it to knock up a sleep-out or verandah, and it was such a boon to property developers that by the mid-1960s almost 20% of all Australian houses contained the material.
The connection between asbestos and lung disease was first made in 1927, when a UK pathologist named WE Cooke came up with the name asbestosis. However, public awareness of the disease remained low in Australia until the mid-1970s. |
Of course, asbestos isn’t the only household material now known to be toxic. Before the 1970s, house paints contained high levels of lead, an ingredient especially harmful to children, pregnant women and unborn babies. And before lead pipes were replaced by copper in the 1930s, Australian drinking water would have had unacceptably high levels of lead. 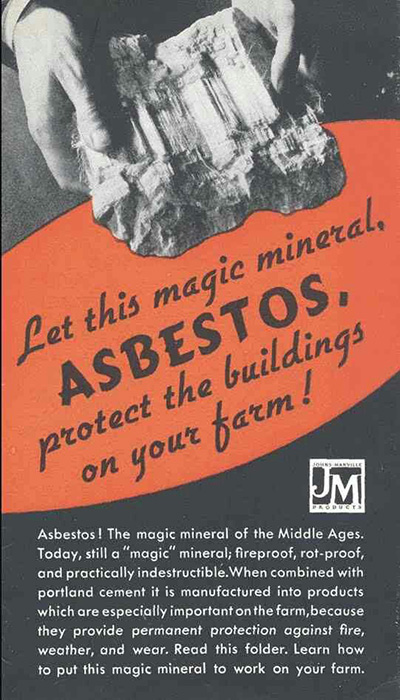 Sure, it seemed like a good idea back in 1935: the introduction of a toad from South America to battle beetles destroying Queensland’s sugarcane crops. The hardy critters’ appetite for insects was voracious, but no one seemed to consider the toads’ ability to breed, their impact on the habitat of native wildlife, and the poisonous effect on any native predators unlucky enough to eat the toads.
Cane toads can now be found all the way up the eastern coast of Australia, as far south as Port Macquarie, all the way across the Top End to Kakadu and beyond, more than 2000km from the site where they were released. And the beetles? The toads didn’t eat ’em.
The introduction of bunnies and prickly pear cactus is up there with cane toads on the stupidity meter, along with the insertion of European carp into the Murray Darling. And don’t even mention rabbits.

Remember the video-format wars of the 1970s and ’80s? The battle to win dominance of the burgeoning videocassette recorder market was largely fought between Sony’s Betamax on one side, and the VHS format developed by JVC on the other. Other competitors knocked out of the competition early on included Phillips’ LaserDisc and RCA’s Capacitance Electronic Disc.
Betamax was seen as the superior product, being more costly, with better sound and image. VHS was more affordable but the crunch came down to minutes: Betamax could manage only a measly 60 minutes of, admittedly superior quality, recording time. VHS could double that at 120 minutes.
In 1975, Betamax owned 100% of the market. Ten years later, 90% of the home video- recording market had moved over to VHS.
Of course, VHS has since gone the way not only of Betamax but also its successors, DVD and HD DVD. Sony got one back with its Blu-ray Disc format leading the video data- storage technology battle in the recent past. But we suggest they don’t get too cocky.
There’s sure to be another rival on the horizon. 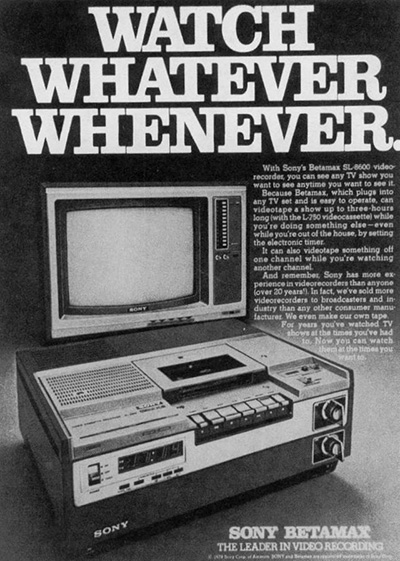