These days, the engagement ring outshines the wedding ring in sheer dollar terms.
Choice says the average Australian engagement ring costs around $5,000 (Tiffany’s, who have no personal interest at all in the matter, put the spend at $15-20K). But it's the simple band of gold that carries the real symbolic clout. Let’s look at how the wedding ring has evolved over the centuries – it hasn’t always been a his-and-hers emblem of undying love…

The first recorded sighting of wedding rings is from the ancient Egyptians. Papyrus scrolls dating back thousands of years tell us about rings made of hemp or reeds being exchanged between spouses. These humble accessories, far from our modern blinged- out wedding jewels, found their value in symbolism – representative of the sun god Ra, the circle was a symbol of eternity, and thus the perpetual love of the spouses. 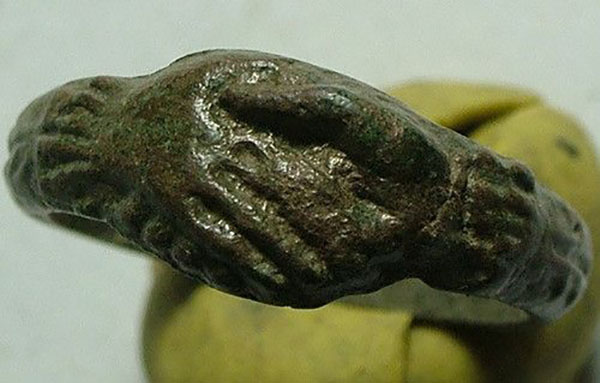 The Western wedding ring tradition took off with the ancient Greeks and Romans.
There’s evidence that both cultures used rings as a sign of betrothal, and with the Romans a link emerges – somewhat unromantically – with the bridal dowry and ownership of the female partner. It was the Romans who codified marriage as a legal contract, between families as well as couples – the bride, after all, was transitioning from property of her father to property of her husband. The fede ring emerged at this time – often made of iron and similar in design to Irish Claddagh ring, it shows two hands clasped: in affection, or in a deal-closing handshake?

It’s also from this time we get the tradition of placing the wedding ring on the fourth finger of the left hand. It was believed that a vein in this finger (called the vena amoris by the Romans) led directly to the heart – encircling it in metal protected the vein and locked down the love. Think of it as a chastity belt for the finger.

The wedding ring really came into its own in the medieval period, developing along with ideas of romantic and courtly love. Rings were made of gold and precious stones, and became more individualised. Fede rings made a comeback, as did golden posie (or posy) rings, so called because they had short inscriptions – poesy – engraved on their surface.

Popular from the 15th to 17th centuries, gradually the words became more personal, and jewelers had to learn to engrave on the inside of the ring, leaving the outer surface plain. This might be the inspiration behind of the modern fashion for perhaps the plainest of all wedding bands – a simple black tattoo. 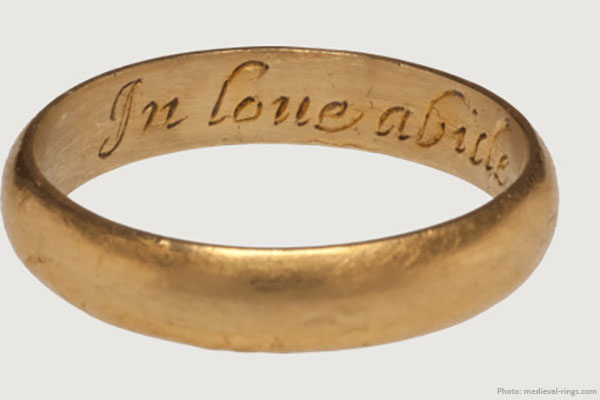 The Renaissance: the advent of bling

The Renaissance was the era of the goldsmith, when the art of jewelry making reached new heights. Sculpturally intricate and adorned with all manner of enameling and gemstones, wedding rings from this era are some top-grade bling. Just look at the gimmel (from the Latin word gemellus, for twin) rings from this era. Interlocking golden rings, they were bedecked with jewels and sometimes contained hidden memento mori – tiny sculptures of skulls that aimed to (somewhat morbidly) remind the wearer of their impending death. Their symbolism, though, was entirely romantic – the betrothed would each wear one ring until they were wed, when the rings were joined together into one, unbreakable symbol of unending love: #nawww. 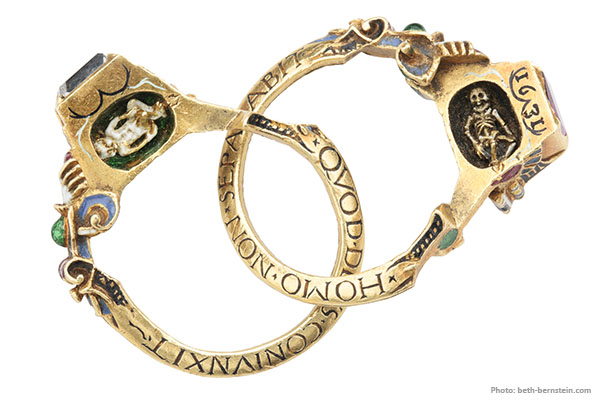 Throughout most of history, the wedding ring was sported only by the female half of the partnership. This changed only in the 20th century, when men fighting in World War II wanted to take something with them to remind them of the loves they’d left at home. With changing fashions in the 1960s and 70s making men wearing jewelry more acceptable (remember this?), and women’s liberation making the idea of marriage as a one-sided property deal less acceptable, rings for both partners took hold. To the point where it was kind of a big deal when Prince William decided not to wear one after his marriage to Kate. Presumably not so he can pretend to be single on Tinder… 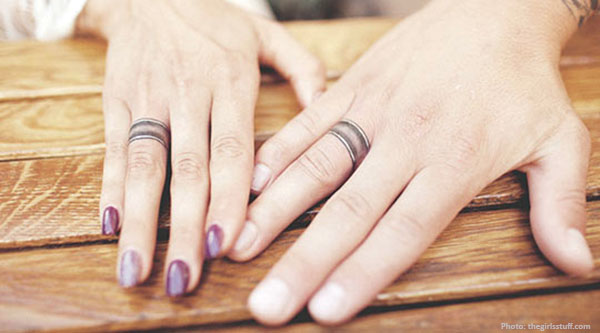