You can almost hear the sniggering echoing from hundreds of thousands of years away.
How else would real cavemen react to the ‘caveman workout’, a punishing regime often described as ‘hardcore’ and ‘unconventional’, popular today with mixed martial artists and other thicknecks?
Since we decoupled ourselves from the physical exercise required to survive, human fitness has become a problem, an obsession, an industry, and sometimes, it seems, a bad joke. Here are some high – and low – points.

For our prehistoric ancestors, peak physical fitness was a prerequisite of everyday survival. Fleeing from slavering predators, pursuing sleet-footed prey, carrying everything everywhere... Life as a nomadic hunter-gatherer was boot camp, for real.
Even after humans discovered farming and settled down, they kept their physiques trim with hours of field-tilling, flour-milling, animal-wrangling and washboard workouts. Bodies toiled to provide enough food to fuel those bodies to continue the backbreaking toil – both a constant struggle and a virtuous circle. Today, of course, we’ve won the struggle and lost the virtue. Enter the ThighMaster.

It was the Industrial Revolution that started us on the path to Zumba classes. With increasing mechanisation, the link between physical labour and keeping body and soul together began to fade. Already by the late 19th century, concerns were emerging about the harmful side effects of this new sedentary lifestyle. Movements began to spring up promoting physical exercise for its own sake, not connected to producing food, fighting wars or building things (apart from a more aesthetically pleasing physique).
Gymnastics, the first fitness craze, rose in popularity across Europe, and the concept of ‘physical culture’ began to take hold in the early 1800s. It was low-tech and high- minded, all about a healthy mind in a healthy body. However, there was an early, worrying sign of things to come with the introduction of the torture instrument-like ‘gymnasticon’ – if the Home Shopping Channel had existed in 1796, this baby would have been a top-seller.

Dawn of the muscle man

By the early 20th century, things had taken a muscular turn. The physical culture movement began to evolve into what we know of as body building, especially in the US where ‘physique contests’ began to be held, leading to the discovery in the 1920s of the world’s most famous muscle man up until Arnie: Charles Atlas. Atlas was the original 97- pound-weakling who had sand kicked in his face on the beach (fitness fads love a transformation story: see also Richard Simmons), and his ads went viral in the hugely popular comic books of the 1940s. His fitness program, Dynamic-Tension, made him the first fitness empire builder. (It’s still going) He would by no means be the last. 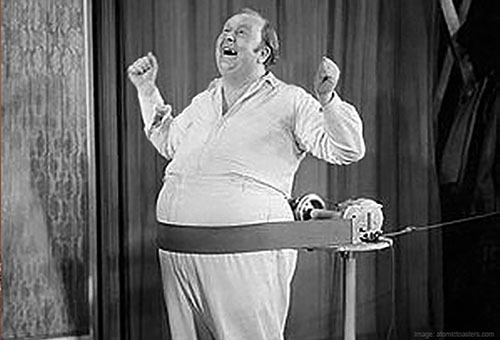 Dynamic-Tension was a simple equipmentless program – squats, leg raises, sit-ups. But it soon became clear what that people really wanted was a) gadgets and b) not having to do any actual exercise. Thus we hit a low point in the early fitness scene: the vibrating belt machine. The idea: the belt jiggled away unsightly bodily fat while you just stood there. A 1960s twist on ‘there’s an app for that’, the vibrating belt promised fitness without pain or effort – we may snigger now, but as modern-day versions like Vibro Shape and Abtronic prove, fitness gullibility is alive and well.
Since the 1960s there has been an endless parade of dubious contraptions promising insta-fitness and quickly finding themselves in spare rooms of shame or on hard rubbish collections everywhere. ThighMasters, Ab Rollers, Sauna Suits – nothing sells like the idea that there’s a sort-of cheap and relatively easy shortcut to a hot bod. 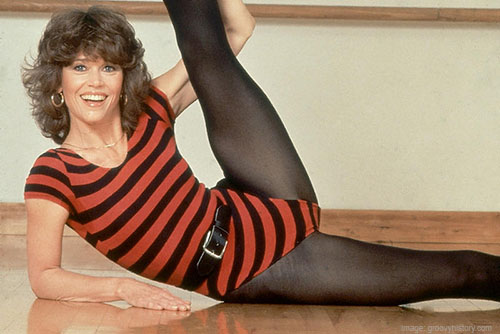 The 1980s: when fitness went mainstream

If fitness crazes had a heyday surely it was the 1980s. Jane Fonda’s epoch-defining, legwarmer-fashion- establishing Workout videos made the lounge room the next bastion of physical culture. All you needed was a VCR and a high-cut leotard and you too could join the craze that created the best-selling home video of all time. Really. Richard Simmons, a formerly obese fitness instructor, brought high camp and classic tunes to the aerobics craze with his Sweatin' to the Oldies videos. All of a sudden there was Jazzercise, and everyone was going to an aerobics class at their local gym. And who could forget when fitness hit MTV in Olivia Newton-John’s hilarious gym-based romp in Let’s Get Physical? (Spot the vibrating belt!)

Saved by the FitBit

So have we actually improved from our slightly shameful and embarrassing exercise past? Wii slightly redefined ‘lounge fitness’ by redirecting our attention from the VCR to the games console. There are still plenty of big plastic ab-busting products out there boasting lightning fast results, and the dizzying pace of the latest coolest exercise class from Zumba to Soul Spinning to Stripper Aerobics makes you dizzy and tired just thinking about it.
But today’s top fitness fad is the wearable fitness tracker that not only counts your activity but provides constant real-time data on your overall state of health. Your technology is watching you, and you can’t trick it by putting on a wobbling belt and calling it exercise.