Gimme a spray can, and look no further for proof that creativity has no use-by date.

Art therapy has been around for decades, but in Denver, Colorado, they’re targeting Alzheimer’s with aerosols. Matching established street artists with older members of the community, the inter-generational program aims to open up ‘memories and pathways in the brain for people to get creative, explore and engage’.
From tagging to bombing, participants are given a quick heads-up on graffiti culture, symbols and tags, and supplied with the necessary equipment: masks, gloves and spray cans. 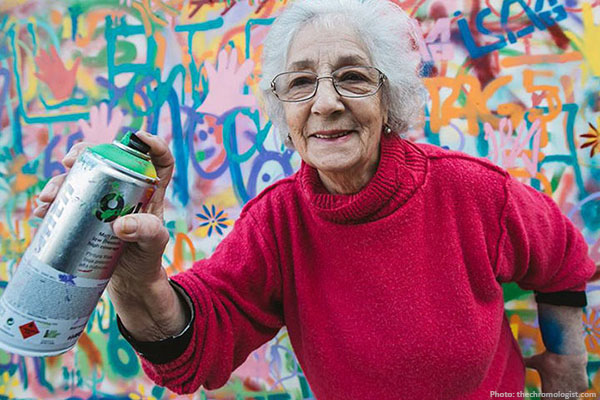 But the radical idea of arming elders with spray cans was born in Lisbon, not Denver. The inspiration behind the trend is Lata 65, a Portuguese arts education group that aims to ‘make a completely new activity that is quite unusual’ – particularly given the age of the participants.
Armed with aerosol cans and masks, the group includes members in their late 80s, who’ve seized the opportunity to add their signature symbols and initials to communal artworks around Lisbon. Their street tags often feature words chosen to celebrate identity or to commemorate a lost partner.
Lata 65’s program of street-art workshops begins with a tutorial on the history of graffiti art, featuring a 101 on the legendary UK artist Banksy, and includes instructions on creating and using stencils to add detail to artworks. The team of artists are adding colour and beauty to Lisbon’s run-down inner-city ’burbs and, most importantly, having fun. And being arrested isn’t something they need to worry about, as their street-wall canvases are supplied by Lisbon city council’s Galeria de Arte urbana.
Along with Denver, the idea of encouraging street art for all ages is spreading across the globe, from Sao Paolo in Brazil to Croydon in the UK and even Byron Bay here in Oz! 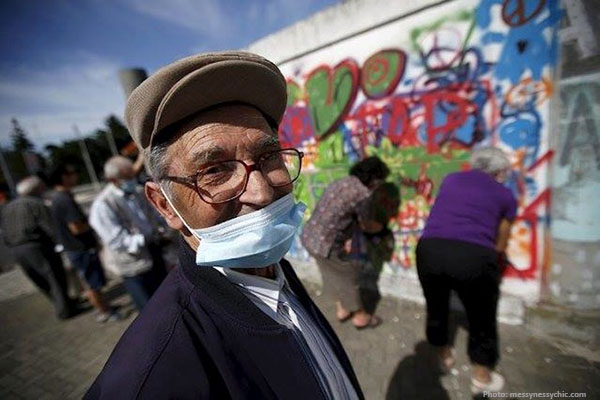 Parisian octogenarian Liselotte Nissen spends her evenings spray-painting images of cats on the walls of her neighbourhood, the Marais. Using the tag name Missekat, and inspired by the work of Gauguin and Modigliani, she ventures out at night into the streets to create her stencil art.
Liselotte was introduced to the medium of graffiti art after a chance meeting with one of the founders of street art gallery The Wall, who encouraged her to take up the new art form. She loves the adrenaline and sense of adventure of nocturnal graffiti art, but rest assured she is usually accompanied by her friends or grandchildren. And her message?
Embrace the bohemian and stay off the beaten track! 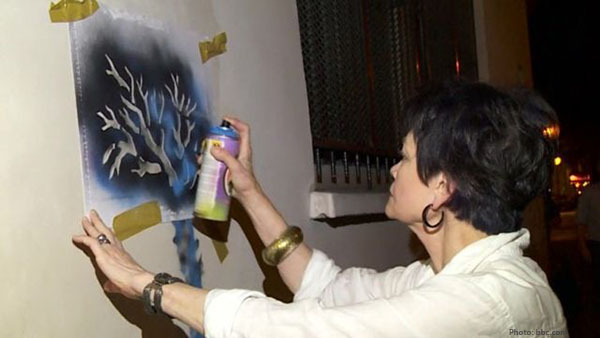 There's an important message behind Irmela Mensah-Schramm's graffiti – her artwork transforms racist, right-wing symbols into messages of hope.
For the past 30 years, Irmela has kept an eye out for racist and anti-Semitic stickers plastered onto letterboxes, road signs and lampposts in her hometown, Berlin. Despite threats by both neo-Nazis and the authorities, she has removed or sprayed over more than 100,000 stickers of hate.
Irmela's efforts to spray away hate have been recognised: she was awarded the Göttinger Peace Prize in 2015, and the stickers she’s removed over the years formed part of an exhibition on the topic of racist stickers, held at the German History Museum in Berlin in 2016. Irmela’s collection of stickers now forms part of an educational exhibition, which she has displayed across Germany. 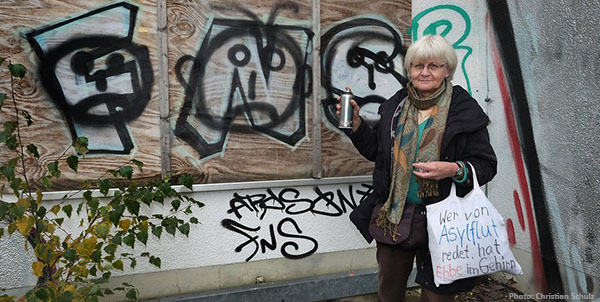 Successful calligrapher Anita George from Warragul in Victoria has swapped her ink brushes for aerosol cans, and paper for larger-scale artworks.
As a calligrapher, her artworks feature lettering and words – ideal for the graffiti format. Graffiti art gives her the freedom to create freeform patterns using layers and stencils, and her artworks are created on larger-scale panels for hanging indoors.
By including words and text in her artworks in paint, she draws attention to her love of calligraphy and invites the viewer to discover more by looking closer. 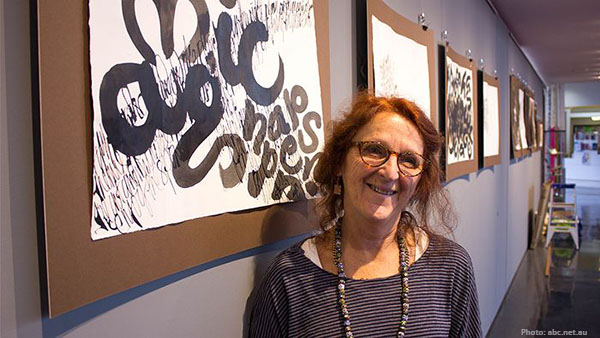