Binging: It’s not what it used to be

These days, when we hear young people talk about binging, it’s unlikely that they’re nursing a headache and regretting bad decisions the night before.
With the arrival of streaming TV services like Netflix and Stan – allowing viewers to choose not only what to watch, but when to watch it – people are now settling in to view several episodes of their favourite TV series in one sitting. It’s the new way to binge, and all the cool kids are doing it.

The Queen binges on Netflix too

Ever wondered what Queen Elizabeth does in the evening while the rest of us are having our cuppa on the couch? Well, it turns out she watches Netflix too. Even better, she watches The Crown. And even better still, the words “binge watching” and “the Queen” have been used in the same sentence.

Let’s not question whether or not everything on the internet is true. Let’s just go with the image of Lilibet and Phillip on the couch with their cups of tea, the corgis curled at their feet. 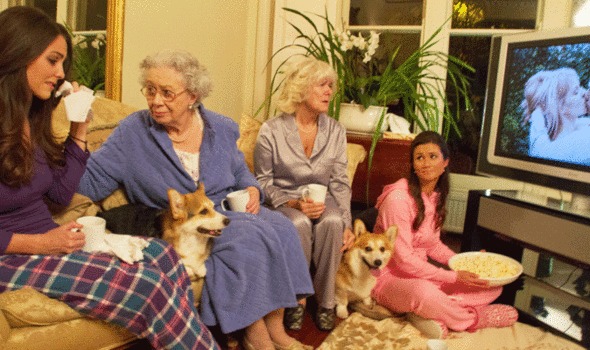 The Crown watching The Crown

So now that we have that image, let’s also imagine the look on her face and the insightful nods she must be giving while watching this particular show. The Crown is a Netflix series that centres on the life and reign of the Queen herself. It includes references to her childhood and her father including parts of his reign following the abdication of her uncle King Edward in 1936.

Do we think she squirms uncomfortably in her armchair at Balmoral Castle as her fictitious self appears on the television, blocking the marriage of her glamourous sister to Group Captain Peter Townsend? And does she have her own running commentary in the lounge room as events of her personal history are played for all to see? Wouldn’t you love to be a fly on the royal wall as Real Life Prince Phillip watches a young handsome version of himself on television, navigating the tricky waters of being a royal consort.

While we're at it, let us stretch our minds a little further. If the Queen watches The Crown, what else might her viewing habits include? It isn’t hard to imagine her walking the halls of Buckingham Palace or Sandringham Castle after an episode of Antiques Roadshow making mental calculations. How about getting another appraisal on some artwork after watching Fake or Fortune?

Whatever it is the Queen chooses to watch, there is a “just like us” moment when you imagine what the other half are doing while you settle down to watch your favourite television series. Bonding with the Royals through the magic of TV? It’s a twenty-first century thing.