What is the Rainbow Tick? 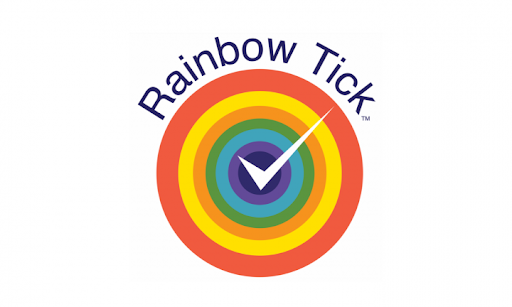 Does this colourful symbol look familiar? You may have seen it on the door of your fitness centre, aged care facility, local council or doctor's office, to name just a few of the locations it can be displayed at.

The Rainbow Tick was created in 2013, born out of a collaboration between GLHV (formerly known as Gay and Lesbian Health Victoria) and QIP (Quality Innovation Performance Limited). It was decided that people need a clearer idea about what services were inclusive of lesbian, gay, bisexual, transgender and intersex (LGBTI) people.

This is where the tick comes in. Displaying the Rainbow Tick not only means that the participating organisations are showing their support to those in the LGBTI community, but it also means that they're following a certain set of standards.

The six standards of the Rainbow Tick

These standards are organisational capability, workplace development, consumer participation, a welcoming and accessible organisation, disclosure and documentation, and culturally safe and acceptable services.

Why is the Rainbow Tick needed?

Organisations that don't display the Rainbow Tick still need to abide by laws relating to the treatment of LGBTI people. Australia's Human Rights Commission was established in 1986 and it investigates any infringement of anti-discrimination laws, including those relating to someone's sexuality.
Yet while these laws are in place, unfortunately it's not uncommon for LGBTI people to be discriminated against.

A 2014 study from Southern Cross University found that LGBTI elders were concerned about the lack of options available to them when it came to aged care.
In 2015, Victoria's Hepburn Health Service became the first aged care provider to get Rainbow Tick accreditation, and since then more facilities have followed suit.
If you�re unsure if your aged care provider is part of the program, you can contact them directly or speak to GLHV on 03 9479 8760.

There is a comprehensive list of Rainbow Tick accredited organisations on the QIP website, making it easy to find out who has committed to providing inclusive services.
Of the 26 organisations, impressively 19 are based in Victoria.

How to get your organisation accredited

There is a fee involved with accreditation, so to find out how much it will cost, contact QIP on 1300 888 329 to receive a customised quote. You too could soon be displaying the Rainbow Tick on your place of work.